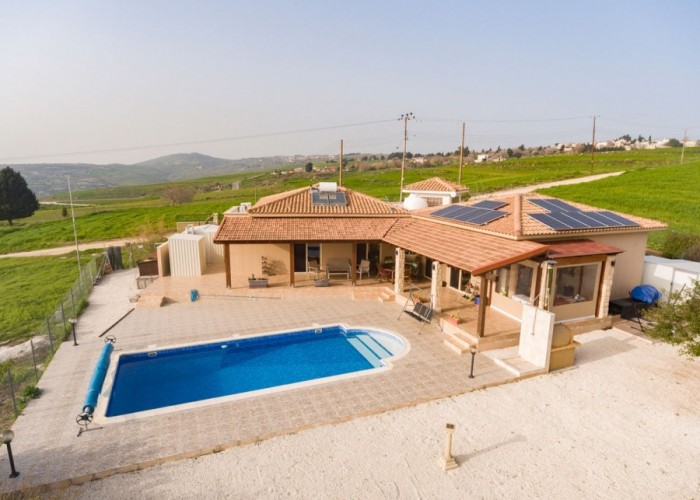 This superior 3 bedroom detached bungalow stands on a magnificent plot of 9000m2 in Arodes, in the heart of the Kathikas wine growing area.  STUNNING SEA VIEWS.

The sea and mountain views are breath-taking and the size of the plot means that nothing can obstruct these marvellous views. For anyone wishing for peace and solitude this is the ideal location, but the local amenities and restaurants in Kathikas village are only 5 minutes’ drive away .

The property is approached via large double gates which lead to a drive large enough to accommodate at least 6 cars.

Most unusually an impressive looking conservatory has been built at the front of the house which leads to the front door. This conservatory is east facing and is the ideal place to enjoy a Mediterranean style breakfast just as the sun has risen.

Once through the front door the quality of both the decoration and the fixtures and fittings are immediately apparent.

The striking feature of the lounge is an atrium which allows the maximum amount of light into the room as possible. The roof of the atrium is finished with highly attractive wood beams and glass finishes to the side add to the attraction of this feature.

The superbly equipped kitchen boasts an island in the middle of the room complete with a gas hob and 4 rings, as well as a DE DIETRICH combination oven, a NAADI dishwasher, NAADI washing machine and GRANITE WORKTOPS.

In addition there is a very generously sized utility room which could quite easily be converted to a 4th bedroom.

The 3 double bedrooms are reached through an attractive archway along a corridor to the east of the bungalow.

The first room along this corridor is the guest cloakroom finished to the highest degree with very modern features. There is plenty of storage space next to this room. Then there is the family bathroom, again with very modern finishes.

The master bedroom includes sliding doors leading to the covered veranda as well as a very practical dressing area with copious wardrobe space and state of the art en- suite wet room.

Bedroom 2 also has sliding doors to the veranda as well as plenty of wardrobe space .

Both of these bedrooms offer superb sea views – just imagine waking up in the morning and the first sight as is the sparkling blue Mediterranean sea!

The third bedroom is on the other side of the corridor and offers equally stunning views of the mountains, so there are views to suit all tastes.

We mentioned at the start of this description the size of the plot – 9000m2. The bungalow has been built to the rear of the plot so the vast majority of the plot is between the bungalow and the sea. This means that the views will not be obstructed by any other buildings but it also allows the owner to build on the land and extend the property even more should they so wish.

The pool and covered veranda face south west so the sun can be enjoyed for the vast majority of the day and should the rays become too fierce then you can always go to the other side of the house for some shade.

The 8mx4m pool includes Roman steps and is lit after dark adding to the special ambience of the surroundings. There is also a traditional BBQ and shower- in fact everything one would want to fully utilise Mediterranean living.  Attractive trees and shrubbery surround the bungalow and a small orchard can also be found in the garden.

Everything about this property shouts CLASS, from the stunning atrium to the delightful low-level designer lighting.

In addition to the usual features we should also point out the very economical Inverter Air conditioning system, and the  solar powered electricity which feeds back into the grid resulting in very low electricity bills. Bills are issued bi-monthly in Cyprus and the bills for the last 6 months have just been for the standing charge, €30 for two months!

Added to the above there is oil central heating. 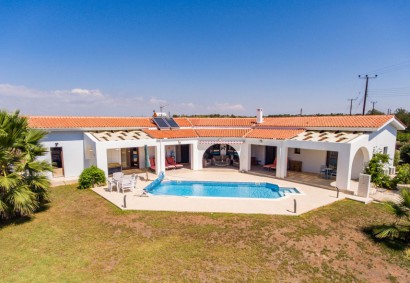 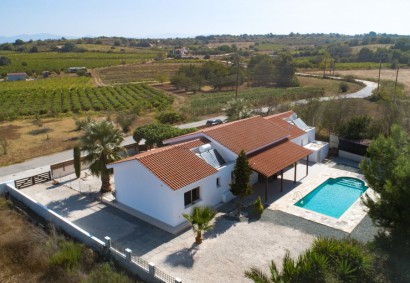 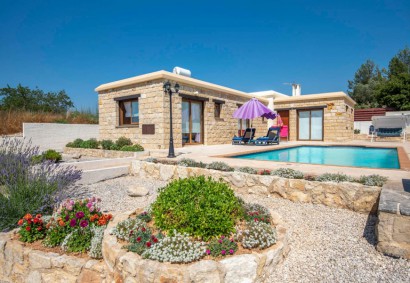 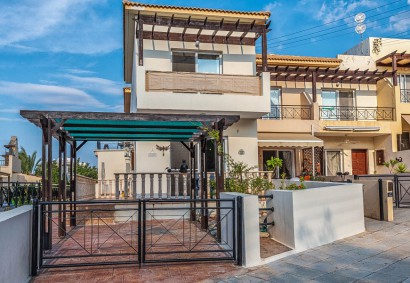 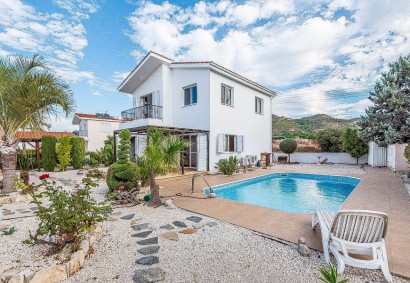 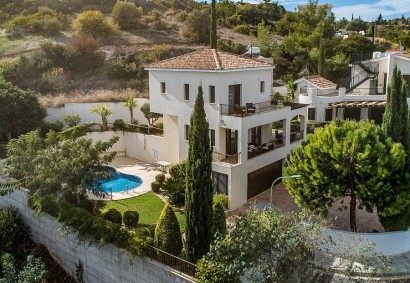